Wahconah Regional High School's "A Forest Under the Moonlight" 2018 Prom

Wahconah's 2018 Prom was held under the event tent at Hancock Shaker Village with Mazzeo's Ristorante of Pittsfield catering. Besides joining them for a (wildly successful) school dance in September of 2016 after a failed attempt to book me for their 2014 prom (which I couldn't DJ because I was booked at a wedding that day--but I did do full ballroom uplighting for them that day), I haven't been with Wahconah much through the years--so no know one really knew what to expect. But theirs being just one of 6 proms I did within 2 months that year, I had a pretty good hunch they's eat it up. And they totally did! 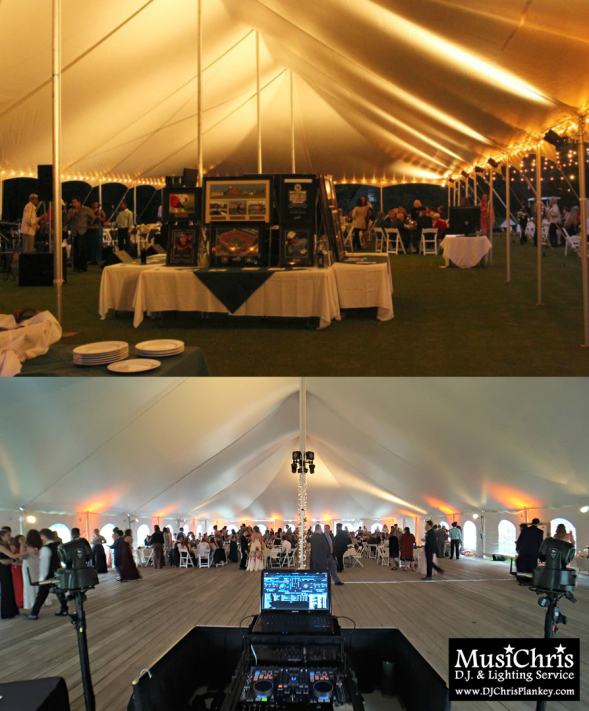 Despite pitching some wildly creative ideas that would've fit their theme perfectly (especially under that HUGE tent--think gigantic blank artist's canvas), they (surprisingly) instead requested only some amber uplighting around the perimeter of their massive 100' x 60' tent. I demonstrated, in person, 2 mounting methods for the uplights themselves. Again, surprisingly, they opted for the easier method of just plunking them down on the floor (as seen in the bottom of the two photos above). While the results are still effective, I had generously offered (at no extra cost) to mount the lights at the top of the tent's walls cascading light more evenly across the entirety of the ceiling panels of the tent (as seen in the top of the two photos above)--to which they politely declined. To their credit, they expressed concerns about having fun at a dance party that wasn't "dark" enough. It was then I could see what was was important to them--so I came prepared to deliver on that. Check it out below.

Check out this event with a similar theme!