Brendan Kordana hosted this Christmas Party at the Crowne Plaza in Pittsfield, Mass. in December of 2016. I was hired to design the lighting for the event. 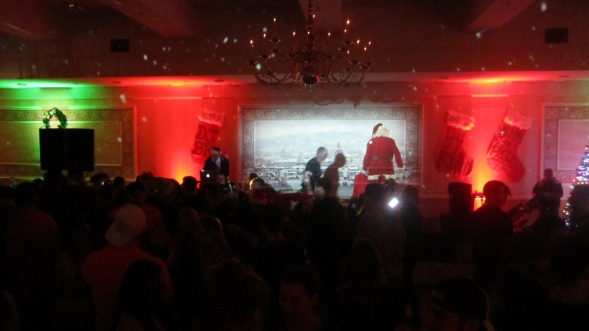 I provided red and green uplighting on all four walls of this massive ballroom. The hotel had hung a ton of wreaths as part of their routine decorating for the Holiday season and we decided it would be wise to accentuate those by pinspotting each one. The event began with CJ Field taking the main stage, followed by the band Bits n Pieces. After the live performances on the main stage, DJ BK headlined the event. You can see the image of Santa Claus on the wall. That was the featured graphic the client used to promote his event. Once he took over to DJ, I featured his graphic as a custom monogram on the wall behind the main stage. Up to that point in the event, the stage was too full with equipment and performers to display a monogram of this size. The star of my lighting design at this event was a widespread falling snow effect that surrounded the entire dance floor! I've done it many times since, but this was the first time I had ever worked it out--and the first time this area had ever seen such an effect in person! Check it out in the video below.