How Chris became a Disc Jockey 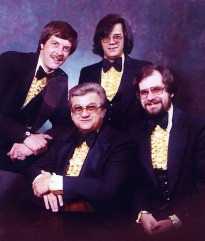 Chris comes from a family of musicians. He has two uncles who have made successful careers out of their love of music. His father, Chris Plankey Sr., was a member of the band, "The Chimes." His band performed in Berkshire County for over 25 years throughout the 70's and 80's, often performing at 3 events each weekend. Saturday mornings were routinely spent setting up equipment for the evening's party and little Christopher and his younger sister, Sarah, loved tagging along with Dad, playing with the band's lights, and slipping around freshly polished dance floors in their socks.

Through the years, the members of the band changed, and as each one left, they were compensated for any investment they had made in the band's equipment. Eventually, Chris Sr. was the last original member of the band. When "The Chimes" performed for the last time, Chris Sr. took home a massive pile of sound equipment and lighting. And young Chris couldn't keep his hands off it.

After watching his father spend literally decades on stage, Chris naturally saw himself there too. His family spent summers camping at Laurel Ridge, in East Otis, Massachusetts. There, the kids were given permission to organize a teen dance.  Young Chris was put on stage for the first time. That night, playing records and cassette tapes (seriously?!--...yes), Chris set off on the road to becoming a DJ. Even he couldn't have guessed the personal satisfaction and success it would bring him for decades to come. By the time he was a junior at Pittsfield High School, he was hired by the school to perform at the senior class picnic, and senior banquet.﻿﻿

After high school, Chris remained in Berkshire County. DJing all the while, he attended Berkshire Community College and graduated with an Associate's Degree in Business Administration. He was accepted into The Isenberg School of Management at the University of Massachusetts in Amherst. Chris returned to the Berkshires every weekend during his college years DJing events of every kind. He graduated with a Bachelor's degree in Business Management.

Is This All He Does? It is now, but it wasn't always. 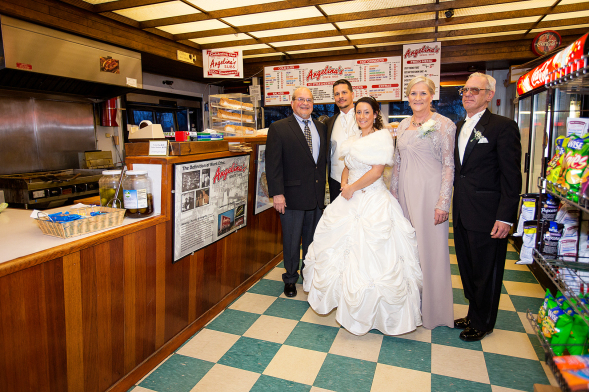 Most DJs don't enjoy full-time work year-round, so to supplement his income he joined the rest of his family, and began working part-time at Angelina's Sub Shops in the spring of 2000. His family owned multiple franchise locations for around 20 years. For over 15 years, that's how Chris maintained control of his weekly schedule to keep DJing his priority while still allowing for the meetings, consultations, and site visits that made it all happen. After that long, understandably, many people regarded him as "the guy from Angelina's." But the people who knew Chris best knew he was first and foremost a passionate and accomplished mobile DJ. Dozens of soon-to-be newlyweds enjoyed consultations (and great food) at the tables of Angelina's. Finally ready to take his own business full-time, Chris left the family business at the end of 2016 and has devoted all of his time and energy to his DJ and lighting company ever since.

So, to go back to the beginning, Chris has one person to thank for becoming a professional DJ. The lessons and tips learned from his father had less to do with the learned techniques of how to satisfy a finicky crowd or manage sound reverberation. There was far more to be learned from the hours spent together clipping colored gels, dissecting electronics, and quizzing each other on "who does this song?"  It was more about two generations sharing what they love. One generation passing to the next a gift for entertaining, and a genuine love for music--music that brings people joy on their most joyous of days.

Today, Chris still DJs full-time and lives in the Berkshires with his wife Nichole and their children.

"I cannot say enough good things about Chris. We reached out to him for DJ services and got so much more! In addition to providing DJ services specifically tailored to our tastes and our guests, Chris helped with timeline planning, both in offering suggestions to us and working with our venue to ensure everyone was on the same page.

Chris personally is a very friendly individual, clearly passionate about what he does, and is always courteous and professional. Lots of email communication, many questions asked, and Chris always replied in a timely manner and with thoughtful replies.

On the day of the event, Chris handled DJ, MC, and ceremony music duties and struck a perfect balance of getting everyone involved without ever coming across as being pushy or in your face. I would work with Chris again in a heartbeat."

Contact Chris now about your event, or learn more about what sets Chris apart and makes his company among the most in-demand wedding entertainment companies in The Berkshires of western Massachusetts.