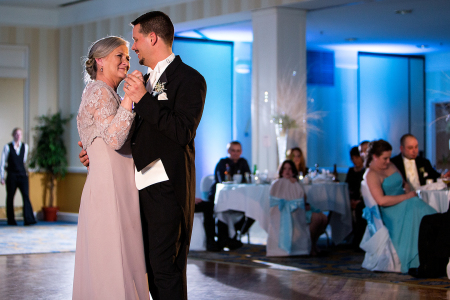 Stuck on what to choose to dance with your mother to? Have you thought to ask her what she might like? Many songs are good suggestions on the premise that your mother is sending you a message during this special dance which is sometimes more important to her than it is to you. Think carefully before cutting this event from your reception. Check out this link to see 100 great choices (you can click on each song to hear it and also read the lyrics).

How about a special mix?

Can't decide on just one song? Choose a few and I'll make a special mix for you.

$49 for a special mix similar to the ones below

Here's one that starts out slow and rather predictable, but by the end is anything but, used in the summer of 2017 for Lisa and her son: Mother Son Mix 2

Here's another one made for Dana for her wedding in early 2015 where she and her husband choreographed a riotous routine where she and her dad and her new husband and his mom all danced together!: Mother Son Father Daughter combo

Here's another example for a father daugher dance: this one was made for Corey and her dad to dance to at her wedding in spring of 2014: Father Daughter Dance Mix 1.

Another example (for a father daughter) if it's something more wild you're after. I put this one together for Allison and her dad for her wedding in summer of 2013: Father Daughter Dance Mix 2.

Here's one for a couple's first dance on their wedding using the songs of their choice--it starts out slow and along with some of the "usual suspects" this one includes some Lebanese music! Wedding First Dance Mix 1

Want something even more special?

What would you tell your mom in the perfect thank you note? How about telling her in person at the start of the dance you'll share with her? Worried you'll blow it under the pressure? That's impossible...here's why... you'll write and record the message in your own voice ahead of time and I'll put together a special mix to the song of your choice.

$99 for a special voiceover mix

Check this one I made for Krysten to dance with her dad to at her wedding in the summer of 2014. She used it to help explain to her guests why she picked the song the song she did (which was a very rare vintage recording...even the intro featured a rare track near and dear to her and her father who are both music aficionados: Father Daughter Voiceover 1.

Take the whole thing to a new level (and take some of the eyes off you if you're worried about that part of it). Really turn on the tears for mom by adding a special slideshow during your dance with her.

(shown on a 100-inch projection screen)

$79* for a special slideshow made just for you*

(you provide up to 35 pictures as digital files)

$79* I'll scan, retouch, and include your old photos

(you provide up to 35 straight from your albums)

See this one I made for Stephanie to surprise her dad with at her wedding in the summer of 2014: Montage 1.

Or this one I made for Michelle (including some slides with text that she chose to include) to surprise her dad at her wedding in the fall of 2014: Montage 2.

Here's one I made for Amanda and David Montage 3. I looped it continuously (without the backing music) throughout the cocktail hour.

And there's this one I made at the request of Oscar and Marilyn to honor their relationship of 20 years and their children. We showed it on their wedding night while they gathered together to watch it. Montage 4.